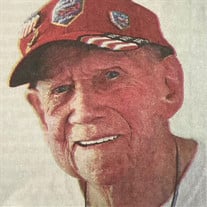 Edward Kaczmarek went to meet God, his beloved wife Jessie, and many family members on December 31, 2021. He was 100 ½ years old. Edward is survived by his daughters Michele Kaczmarek and Sally (Lou) Budik and his two cherished grandchildren Louis M. Budik and Dr. Sarah Budik. He is also survived by his sister-in-law, Aloise Neubeck. Edward leaves behind a myriad of treasured family and friends. He is predeceased by three brothers: Chester (Emily), Frank (Wanda), and Stanley (Florence) and five brothers and sisters-in-law; Angela (Mike), Walter (Jean), Edward (Ollie), Fred (Laura) and Dorothy (Chet). Ed was a devoted family man. He was especially involved in his grandchildren’s lives, from reading them their first books to teaching them how to plant a garden to supporting and encouraging their dreams in adulthood. Born and raised in Buffalo, NY by Anthoney and Salomea Kaczmarek (Raczkowski) in 1921, a difficult era, Ed attended Seneca Vocational High School, graduating in 1939. He became a machinist and had a long career as a tool and die maker at Trico Products. Edward served in WWII in the Army Air Force as a radio operator and tail gunner on a B-24 and flew in 51 successful missions. He served from October 1942 to November 1945. On June 7,1947, Edward married Jessie C. Zasowski, and they built a home in Depew, NY. Together, they celebrated 67 years of marriage until her passing in 2014. Ed resided there until his death at home. In addition to his family and work, Ed always found time to give of himself to his community. He and Jessie established the Depew Senior Center in 1971, where he was most recently and active member. He served on various boards of directors and committees at his children’s schools, his military post, and his job. In his retirement, Ed and Jessie volunteered for Meals on Wheels, delivering food for over twenty years. He was an active member of his church, St. James Roman Catholic Church in Depew currently known as Blessed Mother Theresa of Calcutta. Edward was an avid bowler into his eighties, a gardener, and his family’s Mr. Fix-It. He was also a blood donor, donating gallons of blood to the Red Cross throughout his life. The world is a little less bright today without Ed’s light on earth, but Heaven is beaming. “Do widzenia (until I see you again), Grandpa”. The family will be present to receive relatives and friends on Wednesday and Thursday from 4-8 PM at the DANIEL R. SMOLAREK FUNERAL HOME, 2510 Union Rd., Cheektowaga (2 blocks south of William St.), A Mass of Christian Burial will be held on Friday at 10 AM in Blessed Mother Teresa of Calcutta Church, 496 Terrace Blvd., Depew. Please assemble at church. Entombment in St. Adalbert Cemetery, Lancaster.. Donations can be made in Ed’s name to the Depew Senior Center, 85 Manitou Street, Depew, NY 14043 or FeedMore WNY (formerly Meals on Wheels), 100 James E. Casey Dr., Buffalo, NY 14206.

Edward Kaczmarek went to meet God, his beloved wife Jessie, and many family members on December 31, 2021. He was 100 ½ years old. Edward is survived by his daughters Michele Kaczmarek and Sally (Lou) Budik and his two cherished grandchildren... View Obituary & Service Information

Send flowers to the Kaczmarek family.